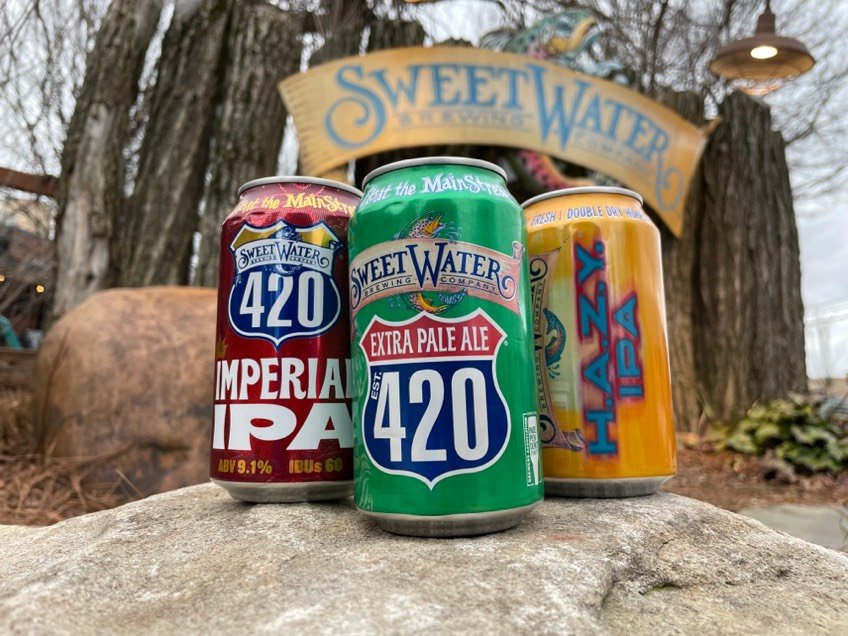 11th Largest Craft Brewer in the U.S. Brings West-Coast-Style Brews to the Pacific Northwest in Partnership with Columbia Distributing

ATLANTA, GA, February 22, 2022 – SweetWater Brewing Company, LLC (“SweetWater”), a subsidiary of Tilray Brands, Inc. (NASDAQ: TLRY and TSX: TLRY), has announced its continued westward expansion into both Washington and Oregon, with distribution partner Columbia Distributing, keeping up the momentum after the announcement of its launch into California earlier this month.

“There’s no better way to celebrate our 25th anniversary than to raise some pints of 420 with our new friends on the other side of the country,” said Freddy Bensch, co-founder and CEO of SweetWater. “West-coast styles brews are what inspired the creation of SweetWater 25 years ago, and we’re excited to bring our beers and culture into these great craft beer states with more to come.”

SweetWater Brewing in partnership with Columbia Distributing will bring its core line of quality craft brews throughout both states, including its flagship SweetWater 420 Extra Pale Ale, H.A.Z.Y. IPA, and 420 Imperial IPA, in addition to its rotating variety packs featuring a variety of other heady brews, into local restaurants and bars, grocery chains, liquor stores and other retail establishments.

“After months of planning, we’re thrilled to finally be launching SweetWater and its brands across our distribution footprint,” said Columbia Distributing’s CEO, Chris Steffanci. “As they continue to expand and grow within these new markets, we are pleased to be a partner alongside them as together we bring SweetWater brews to a wide-range of consumers across the Pacific Northwest.”

“The SweetWater brand has managed to expand across three west coast states in the past month, which has been an exciting journey and accomplishment for us” said Zack Koenigsberg, Business Development Manager for SweetWater Brewing Company. “Our rapid growth speaks to the ongoing success our quality craft brews have had over the past 25 years, and we’re excited to continue delivering high quality and innovative products for years to come.”

The expansion into Washington and Oregon marks the 39th and 40th states respectively, where SweetWater products will now be available for purchase.

SweetWater is passionate about protecting natural resources and habitats and is recognized for its contributions to environmental initiatives throughout its distribution footprint. Supporting the conservation of some of the nation’s most threatened rivers, streams and coastlines is a cause near and dear to the brewery, as clean water is also vital to the creation of their tasty brews.

SweetWater beverages are crafted at two locations, the flagship SweetWater brewery and taphouse at 195 Ottley Drive in the heart of Atlanta, and a second location now open in Fort Collins, Colorado at 1020 E Lincoln Ave. For more information about SweetWater Brewing Company, please visit www.sweetwaterbrew.com, follow SweetWater on Twitter/Instagram @sweetwaterbrew, and become a fan at facebook.com/sweetwaterbrew.

About Tilray Brands
Tilray Brands, Inc. (Nasdaq: TLRY; TSX: TLRY), is a leading global cannabis-lifestyle and consumer packaged goods company with operations in Canada, the United States, Europe, Australia, and Latin America that is changing people’s lives for the better – one person at a time. Tilray Brands delivers on this mission by inspiring and empowering the worldwide community to live their very best life and providing access to products that meet the needs of their mind, body, and soul while invoking wellbeing. Patients and consumers trust Tilray Brands to deliver a cultivated experience and health and wellbeing through high-quality, differentiated brands and innovative products. A pioneer in cannabis research, cultivation, and distribution, Tilray’s unprecedented production platform supports over 20 brands in over 20 countries, including comprehensive cannabis offerings, hemp-based foods, and craft beverages.
For more information on how we open a world of wellbeing, visit www.Tilray.com.