Whether you’re wadin’ in cold waters or waitin’ on a cold beer – it’s time to Re-Up your summer and protect your passions. Wondering why SweetWater is so passionate about protecting trout? All you have to do is take a look at one of our cans (and after admiring it, take a sip of that delicious brew)!

Freddy Bensch, SweetWater’s Big Kahuna, was inspired to start Georgia’s premier craft brewery while fishing Georgia’s premier trout streams. Since Day One, giving back to what’s important to us has been in our DNA. Freddy wanted to use the brewery to make a positive impact, and working with Trout Unlimited has been a focus ever since we started craftin’ our earliest brews.

Trout Unlimited works from coast to coast to protect, reconnect, restore and sustain trout and salmon habitats. In terms of conservation policies and total river habitat area protection, TU is the most effective coldwater fisheries conservation organization in the country. Since 1959 their work has spanned nearly a million miles of cold water all across North America, including in the Chattahoochee River – our backyard honey hole. 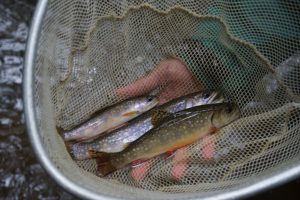 We connected with Mark Taylor, Eastern Communications Director at Trout Unlimited, to hear more about what they’re working on when they’re not reelin’ in fish. Among its many projects to protect and restore streams, TU is leading efforts to bring back wild brook trout to streams they have helped fix – the fancy word for that being “repatriation.” Repatriation boils down to the process of transferring wild brookies in order to re-establish wild fish populations in streams and rivers. Sounds pretty cool huh?

“For many, the Eastern brook trout is the iconic symbol of pristine streams and wild places. Brook trout go hand in hand with clean, cold water, and seeing one rise to your well-presented fly never gets old,” Taylor exclaims. “A number of our projects in the Southeast show what’s possible when native brook trout are given a chance to establish themselves in streams that, after restoration, now have capacity to support trout.”

Taylor elaborates that “Here at TU we like to say that ‘If you take care of the streams, the fishing will take care of itself.’ But sometimes streams have been so degraded that they were no longer able to support any trout. Once we restore those waters, if we provide a little nudge by moving a few wild fish there, those fish will thrive.

“After all, many of these streams contribute to municipal water supplies that we all use for drinking — and that some of us use for making great beer!”

As folks are getting back outside to Re-Up their summers, Trout Unlimited is ensuring there are plenty of opportunities to engage with local chapters. 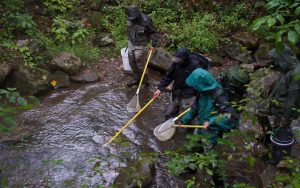 “This summer our local chapters are helping folks get out to help their local rivers and streams become healthier and a more sustainable resource for fish and anglers alike,” says Taylor. “We are encouraging our 300,000 members and supporters to get involved with their local TU chapter to find out how to help, be it with stream restoration projects or advocacy.

“Of course we also want folks to have some fun fishing — and enjoying tasty beer — on those local waterways that we’re all working together to make better.”

SweetWater is helping folks re-up their summers and donating proceeds of pints purchased back to Trout Unlimited. All summer long, purchase a draft of SweetWater at your local watering hole and you’ll have the option to keep two bucks OR donate to Trout Unlimited. Check out www.sweetwaterreupyoursummer.com for the deets.

From cold streams to cold beers, we gotta make sure that we stand up for streams and leave ’em better than we found ‘em – ain’t nothing fishy about that!