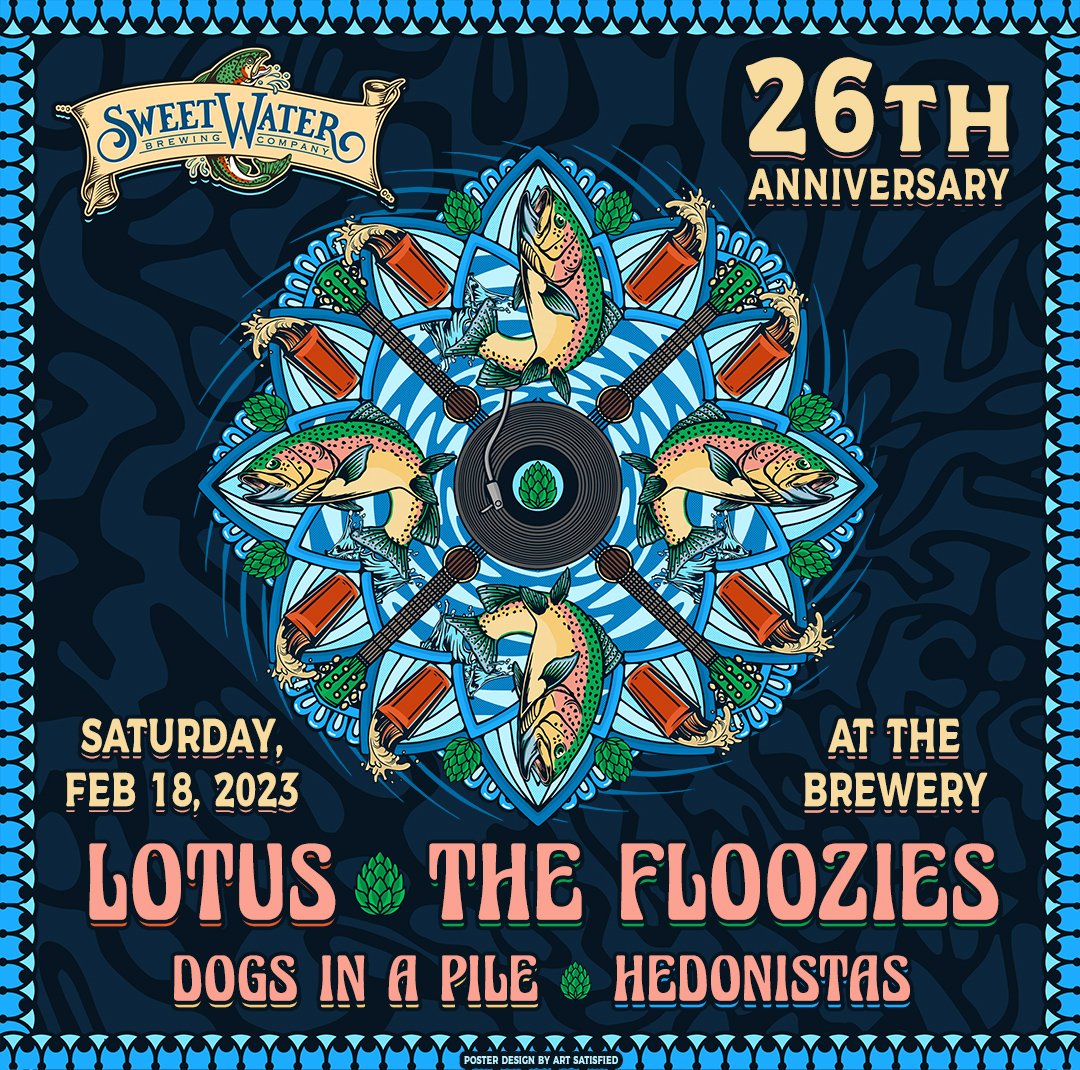 Lotus, The Floozies will headline SweetWater’s 26th Anniversary Throwdown at its Atlanta brewery

ATLANTA, GA, January 11, 2022 – SweetWater Brewing Company, LLC (“SweetWater”), a subsidiary of Tilray Brands, Inc. (NASDAQ: TLRY and TSX: TLRY), announces its 26th Anniversary Throwdown, an all-day party featuring throwback beers, art and musical performances by Lotus, The Floozies, Dogs in a Pile, and Hedonistas. The event will take place on Feb. 18 at the Atlanta brewery from 1 p.m. to 11 p.m.

In honor of the craft beer drinkers who have supported the brewery over the years, SweetWater will be re-releasing popular seasonal and year-round beers in 2023 that customers have asked to bring out of retirement.

For its winter seasonal lineup, SweetWater is re-releasing Georgia Brown, a southern-style brown ale flowing with deep caramel and chocolate malts that create subtle nutty and toasted flavors. A former limited release that was a crowd favorite, Georgia Brown delivers rich cocoa notes with aromas ranging from roasted coffee to chocolate-covered fruit, which are exceptionally balanced with bitterness from Strata, El Dorado, and Sultana hops. Georgia Brown is now flowing at SweetWater’s Atlanta and Fort Collins taprooms, as well as taps in Georgia, Alabama, Florida, South Carolina, Pennsylvania, and Virginia.

“SweetWater is pumped to bring back Georgia Brown, a crowd-favorite limited release. The winter months are the best time to enjoy rich, warming ales loaded with caramel and chocolate notes, so be on the lookout for this delicious brown ale at your local watering hole,” says Anna Ferro, SweetWater’s Director of Marketing.

For its anniversary party, SweetWater will bring back another popular beer, Exodus Porter, a Great American Beer Festival Medal winner that was retired from its year-round lineup in 2013. This limited batch of Exodus will be available on draft exclusively at the Atlanta taproom starting Feb. 18.

“We’re bringing back another oldie but a goodie for our anniversary party,” Ferro says. “It’s been years since we last brewed Exodus, and it’s one of the most requested beers consumers ask us to bring out of retirement. This party felt like the perfect time to do that.”

The anniversary concert will be headlined by Lotus, whose groove-based improvisations have been a mainstay on the jam circuit for more than two decades, and The Floozies, a live electronic duo that fuses bass-driven beats and funk.


The concert will take place at SweetWater’s Atlanta brewery, rain or shine. There will be very limited parking at the event, and SweetWater strongly encourages people to not drive, especially if they plan on consuming beer. Attendees must be 21 to enter.

About SweetWater Brewing Company:
One of Atlanta’s original craft breweries, founded 25 years ago, SweetWater Brewing is now the 10th largest craft brewery in the U.S. With two flagship breweries in Atlanta, Georgia, and Fort Collins, Colorado, SweetWater’s award-winning craft beers and ready-to-drink cocktails are available coast to coast and in more states than ever before. Inspired by the outdoors, SweetWater is a passionate advocate for healthy waterways and conservation initiatives. Through its annual Save Our Water campaign, SweetWater continues to raise funds to support nonprofit organizations fighting for clean water and habitat conservation, including the Waterkeeper Alliance, Bonefish & Tarpon Trust, and Trout Unlimited.

To learn about Tilray Brands, visit www.tilray.com or follow along @Tilray.